Here at Audio46, we often receive requests to compare specific headphones.  While some models clearly out-class others, gaming headphones provide a very competitive landscape for casual consumers and discerning listeners alike.  This dilemma readily surfaces in the case of the Audio Technica ATH-ADG1X vs the Sennheiser Game Zero.  Priced at $299 and $279, respectively, these two models offer remarkably similar listening experiences.  So which one is right for you? 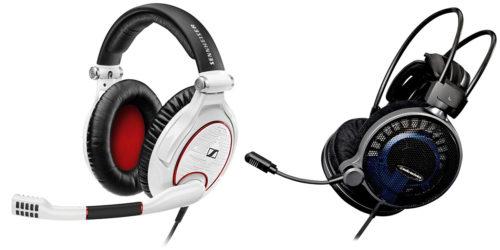 Both the Audio Technica ADG1X and the Sennheiser Game Zero utilize a decent amount of plastic in their respective builds.  While the Audio Technica opts for a goose-neck microphone, the Sennheiser features a more rigid boom-mic.  The Game Zero offers a more common fit with a traditional headband, and uses plenty of pleather padding on the headband and earcups for extended comfort.  The ADG1X, by comparison, features a wing-type headband with velour padding on the earcups – offering a similar level of comfort, but perhaps less bass impact.

Both headphones employ an open-back design for greater depth and a more realistic sound, at the expense of isolation.  While the resultant sound will seem more lifelike with either headphone, ambient noise may distract from the overall experience.  As such, both models are better suited to quieter gaming environments.

While the Sennheiser’s boom mic works as an automatic switch for turning the mic on and off, the Audio Technica sports a more traditional control built into the cable.

Sennheiser’s Game Zero offers interchangeable cables designed for multiple systems – with a 4 ft (1.2 m) cable for consoles, and a 6.6 ft (2 m) cable for PC applications.  The Audio Technica ADG1X features a fixed 4 ft cable that terminates in a standard 3.5 stereo jack, but offers a second 6.6 ft extension terminating in separate plugs for audio and microphone ports on a computer.

As you can see from these specifications, both models offer similar numbers, though the frequency range on the ADG1X does seem a good deal wider.  Nominal impedance remains fairly neck-and-neck.  While both models might benefit from some amplification, neither requires it.  Sound Pressure and volume are decent on both models, though the Game Zero may offer a bit higher volume in general.  Finally, though Audio Technica doesn’t give a rating for Total Harmonic Distortion on the ADG1X, the level of clarity is still on par with that of the Game Zero.

In the low end, the Audio Technica offers a bit more detail, but at the expense of greater bass impact.  That distinction easily goes to the Sennheiser, making up for a lack of detail with plenty of “oomph” in the low end.  Here the Sennheiser is further helped along by the pleather-padded earcups, which help to extend that bass response.

Both headphones offer decent performance in the midrange, though the ADG1X may have a slight edge in terms of sheer detail.  The Game Zero, while offering a similar level of clarity, just doesn’t seem as rich or articulate.

While the Sennheiser Game Zero offers a smoother high end, the bright sound of the Audio Technica ADG1X can verge on piercing at times.  Not a deal breaker by any means, the divergent sounds clearly mark some limitations in use, but may appeal to different listeners in their own right, as well.

Either headphone will supply a much-appreciated level of depth and placement to any music (or sound affect), but the extra detail present in the ADG1X may offer a more grandiose listening experience.  On the other hand, the rich bass response in the Game Zero may give the impression of greater dynamic range, while simultaneously adding some extra depth to the soundstage.

For those gamers seeking a headphone for gaming as well as casual listening, the Audio Technica ATH-ADG1X offers a smarter choice.  While adequately suited for either endeavor, this particular headphone will excel at games relying on impressive musical scores.

Not to be dismissed entirely, the Sennheiser Game Zero still offers some mighty-impressive bass.  This particular strength makes the Zero an optimal choice for games using plenty of explosions, gunfire, and other sound effects.  Pairing that booming bass with an immersive soundstage, you’re bound to get sucked into whatever world you’re exploring.

Check out the Sennheiser Store at Audio46!

View more models in the Audio Technica Store at Audio46!