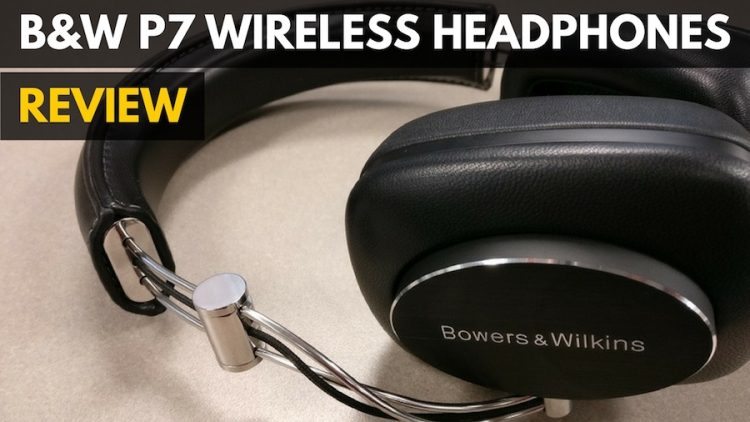 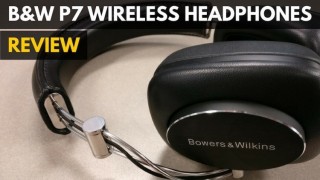 Bowers & Wilkins has been making strides to nab a chunk of the mainstream audio market recently, particularly for those of us who don’t mind spending a bit more for a premium pair of headphones. The British audio manufacturer’s portfolio does a great job to stand out in the crowd, succeeding at unique designs that are classy and luxurious. It also helps that its acoustics are audiophile-grade and pricing isn’t generally that far out range for most people’s pocketbooks.

Now the company is fully embracing the Bluetooth wireless trend, and has just released a new over-ear to lead the pack – the P7 Wireless. The preceding P7 wired variant was highly regarded, so let’s find out if the company was able to maintain that excellence without the wire in our Bowers & Wilkins P7 Wireless headphone review.

The Bowers & Wilkins P7 Wireless is successful in dropping its predecessor’s cord while maintaining what made it great. The company’s high quality standard can be seen from the elegant choice of materials to the clean and crisp sound. But compromise isn’t completely inevitable, as this cordless P7 variant isn’t exempt from a weight increase and hit to its HiFi performance.

B&W’s headphone makeup isn’t a far cry from other well-regarded audio manufacturers, but it’s implementation is what sets it apart. The styling of the P7 Wireless gushes with a classic headphone vibe and exudes an aura of dominance thanks to its high quality black leather which invokes seriousness in practice, but also makes for a luxurious wearable. And the premium facade is aided by the eye-catching, shiny metal accents throughout. 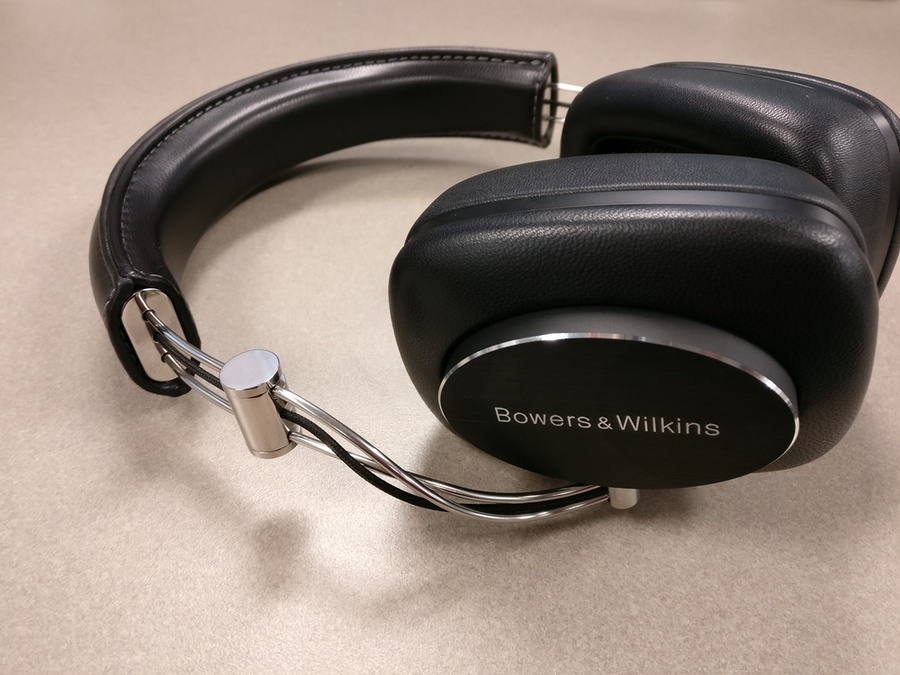 One of the most interesting design elements is how the ear cups connect to the headband. Two thin metal rails curve around each other and meet on one side of the ear cup. At first glance, this doesn’t appear to be the most structurally practical design, but the in-hand feel assures you that it’s sturdy.

The ear cups boast a raised cap that showcase a dark, brushed metal finish surface, shiny chamfered perimeter, and Bowers & Wilkins logo atop. Aside from these things, the form of the ear cup and headband are fairly minimal. The quality leather does the talking, which is seamlessly and tightly wrapped around the ear cups (aside from plastic inserts that houses the electronics) and the uniformly cushioned headband (rimmed with white stitching). 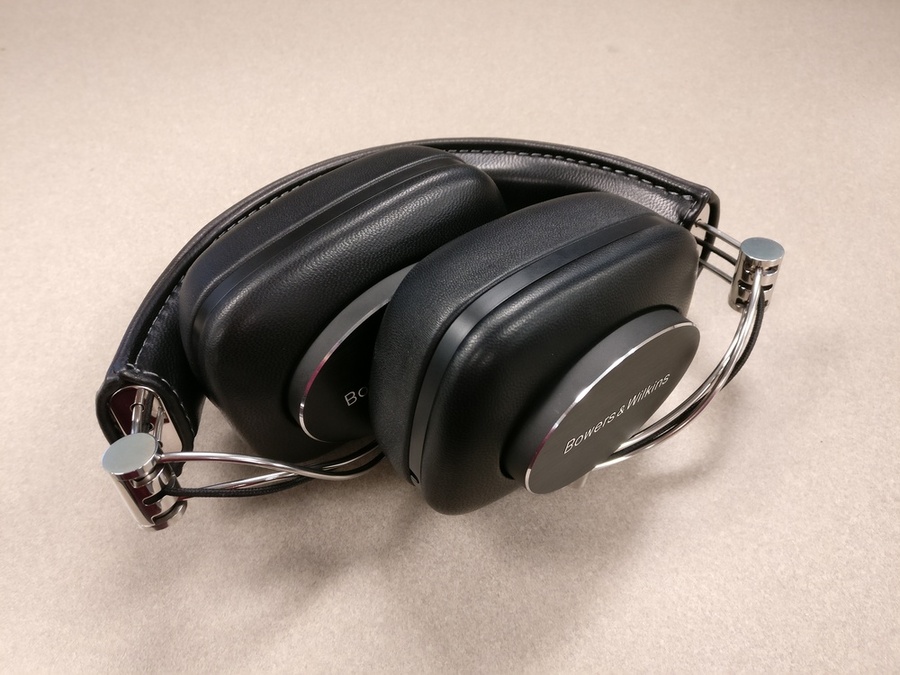 The cylindrical joints on the stems cleverly allow for the ear cups to rotate 90 degrees and reduce the headphone down to a more travel-friendly size. However, the protruding caps on the ear cups don’t allow for the most effective fold, but we’re still glad that B&W threw in the feature nonetheless. The included case is on the thick side, but it is reasonable for carrying around (albeit, a very snug fit). We also appreciate how the case’s materials are just good as the headphones – also leather-made with quality stitching. 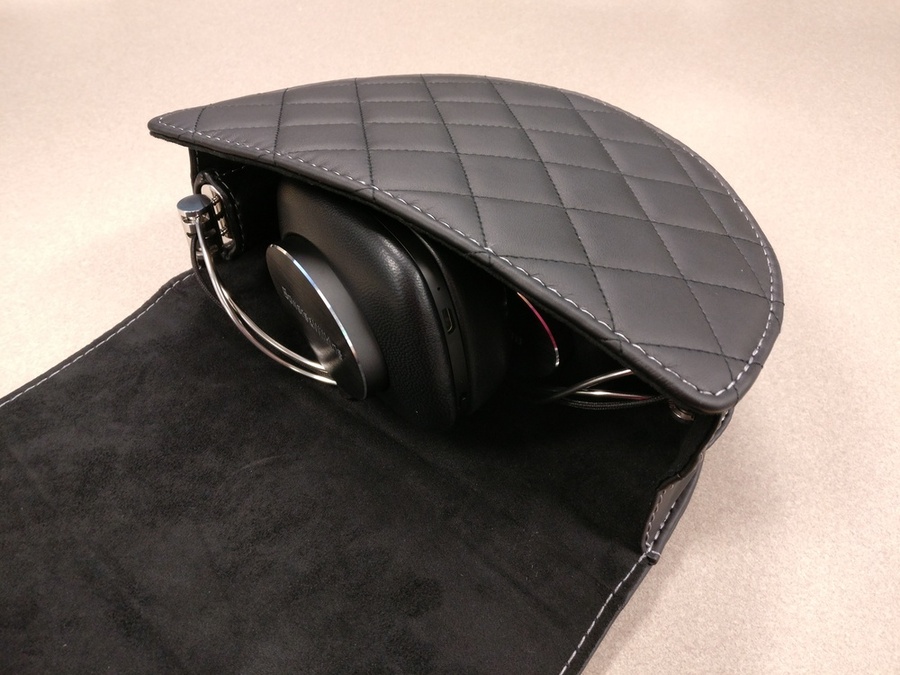 The headphone has a tight fit in the case; there’s little room for any accessories. 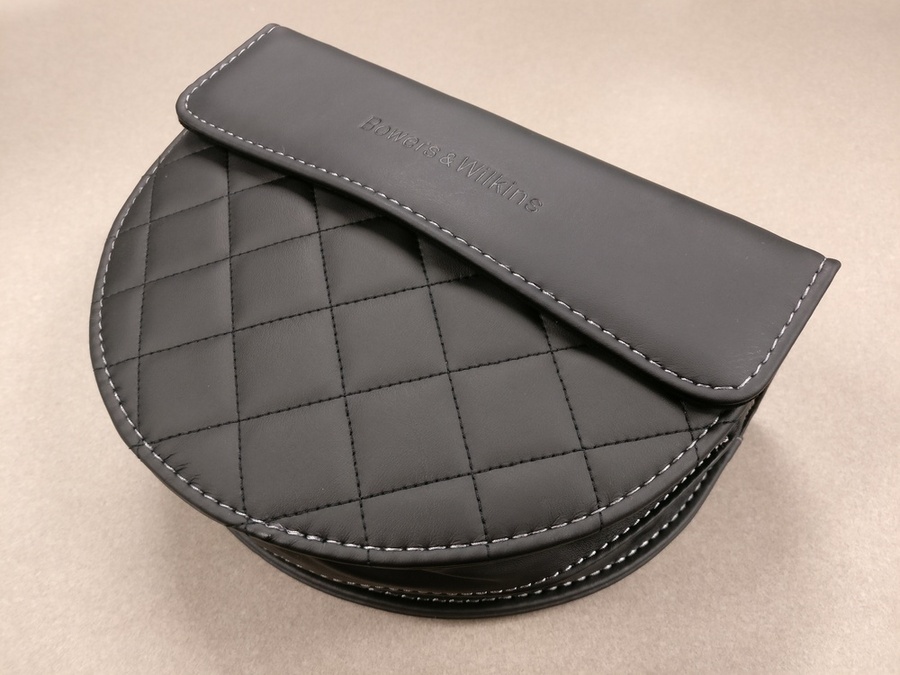 It’s hard to miss the P7 Wireless’ exceptionally plump ear pads, but fortunately, B&W doesn’t just focus on looks but wear and comfort as well. Thick ear pads can help with sound isolation, but it’s important to note that the P7 Wireless doesn’t have active noise cancellation (like the Bose QC25 and Sennheiser Momentum Wireless), so you’re completely dependent on those ear pads to block the environment’s noise out. We’re happy to report that B&W’s ear pad design does a great job in this respect, but active noise cancellation systems will still win out in erasing lower frequency noise. 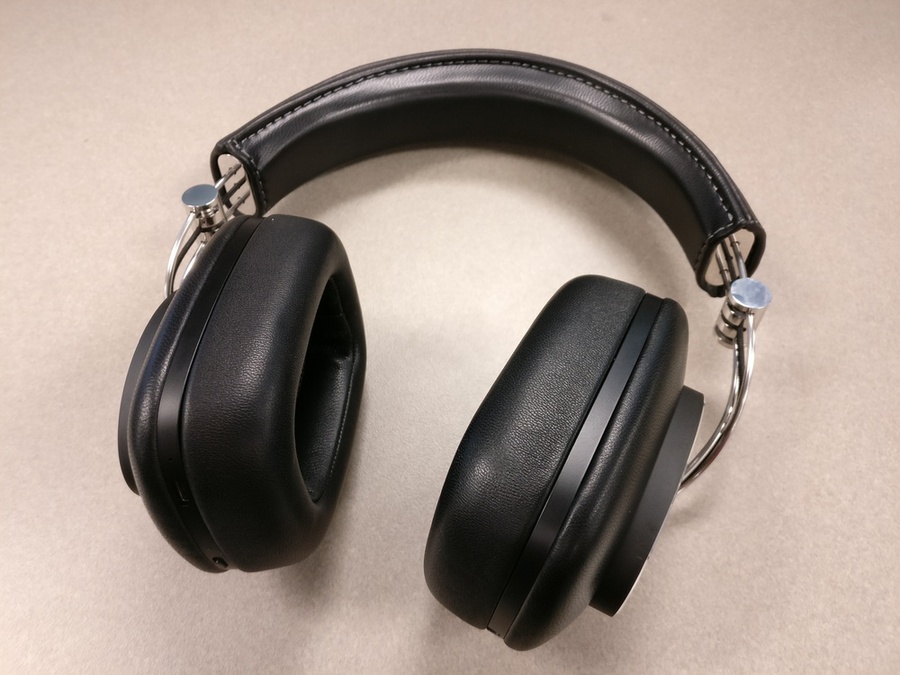 Although the headband is properly cushioned, the substantial weight of the headphones do haunt it somewhat. You certainly feel all 323 grams when it’s on your head. Comfort isn’t an issue whatsoever, but you may need to take a break after an hour or so, after which a pressure point can develop at the top of the headband.

The P7 Wireless includes the electronic features that you’d expect in a Bluetooth headphone today, such as a rechargeable lithum-ion battery and 3-button playback controls. Charging is handled from the microUSB port on the bottom of the right ear cup (a USB-to-microUSB cable included), alongside a power/pairing switch and status indication LED. It isn’t immediately apparent that the P7 Wireless also has a wired function, because while B&W includes an audio cable in the box, the jack is hidden within the left ear cup (accessed by easily detaching the ear pad). 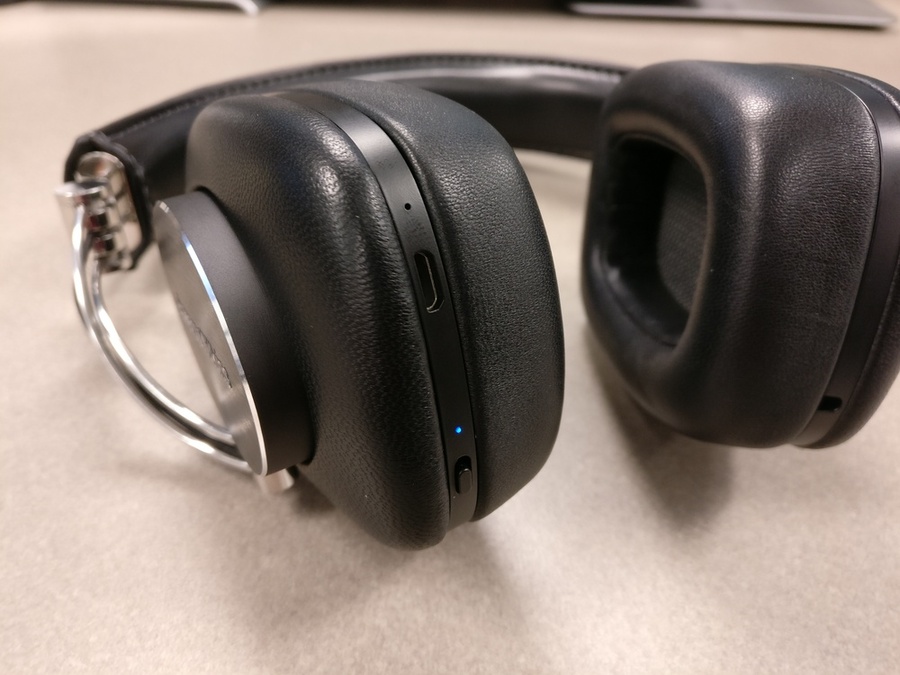 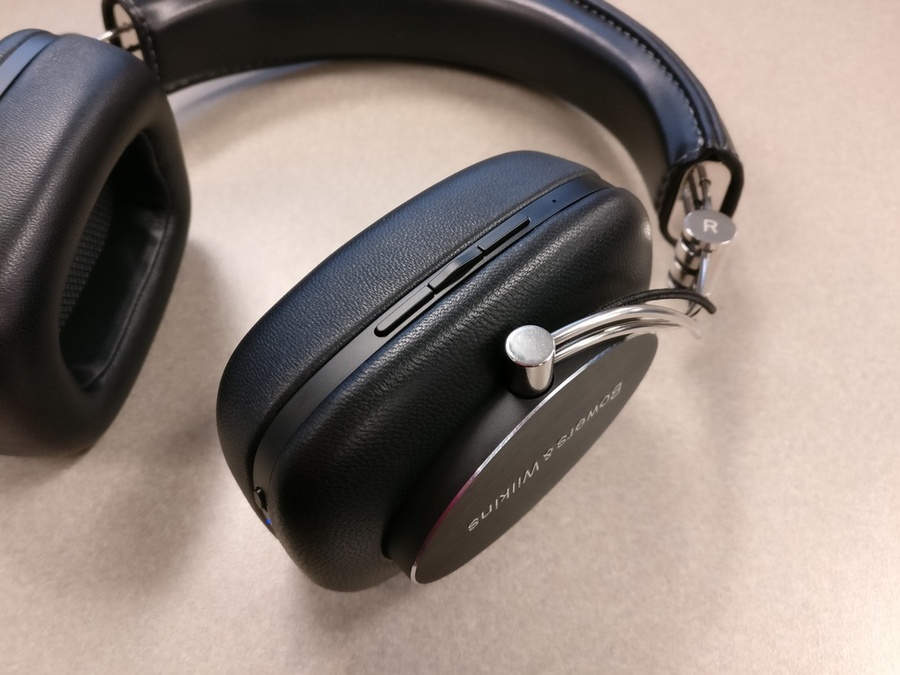 Battery life is an important aspect of Bluetooth headphones, because the magic is lost when you run out of juice. Fortunately, the P7 Wireless is packed with enough capacity to get you around 17 hours of playback before needing another charge. And the great thing about having the capability of going wired is, as long as you have the audio cable around, the headphones will always be able to function.

The P7 Wireless talks the talk but does it walk the walk? Indeed; this is Bowers & Wilkins that we’re talking about after all. Let’s go over where it stands acoustically and if the wireless function keeps up with the company’s standard.

The first thing our ears picked up is the bold bass and the lively sound signature. B&W is great at finding a balance between energy and quality reproduction, where sometimes audiophile-grade headphones end up with a “reference”, but flat, sound. Our feet were thumping from start to end, and it’s refreshing to see an equal amount of detail and musicality.

That said, the bass presence can be a bit too dominating at times (for an audiophile’s ear, at least). Fortunately, it doesn’t conflict with the midrange frequencies, which have a fullness that many V-shaped spectrum lack. B&W headphones are known for their clear and crisp delivery, and we’re happy that this headphone – despite being wireless – continues to uphold the company’s profile of audio excellence. However, the P7 Wireless isn’t exempt from low-level hiss. It’s not loud enough to impugn on the music, but when the track goes quiet, it is ever-so noticeable.

While the overall sound is enough to pass as a HiFi headset, you’ll definitely find clearer and higher reaching detail in more expensive wired offerings (maybe even some at the same price). Particularly, we felt that the sub-bass could be more prevalent and the soundstage more expansive – things that could be attributed to the limitations of the Bluetooth function. But this isn’t to say that audiophiles would scoff at the P7 Wireless’ sound. Overall, it performs masterfully for its class, and it’s one of the best wireless headphones we’ve heard.

In wired mode, some details of the sound do tighten up, especially if you plug it into a more capable digital-to-analog converter (DAC). The bass gets better defined and notes are generally cleaner. But we’re not talking about drastic improvements; the wireless mode is fortunately able to maintain the capability of the drivers for the most part. However, as suspected, hiss was not present when using the wire.

We enjoyed our time with the P7 Wireless and were left impressed with what Bowers & Wilkins can do in the Bluetooth wireless realm. This over-ear checks a lot of the boxes that premium headphone listeners look for, and should definitely make your shortlist if you’re on the hunt for an upgrade. It’s not perfect (no headphone is, really), so just keep note of the concerns we raised, such as the device’s weight and sound quality particularities.