Final Audio’s new E Series earphones seem to be stirring up some real buzz.  Having reviewed the uber-svelte E3000 just a short while ago, my expectations are fairly high for the E2000.  But how does this $45 earphone sound?  And where does it stack up in relation to other Final Audio products? 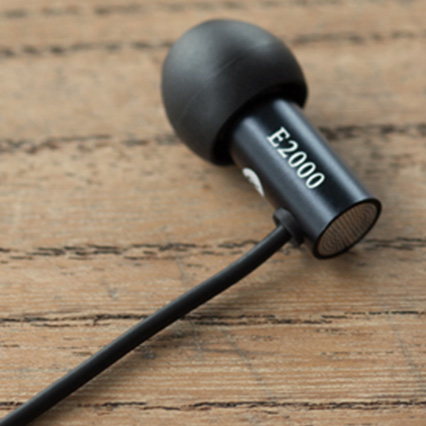 The E2000 comes with four extra pairs of eartips, a soft carrying pouch, and two hard plastic clips to fit the cable over your ears.

If its short on accessories, this earphone makes up for it in build quality.  Utilizing a black aluminum housing on each earpiece, the final result feels light but solid.

Comfort, too, impresses me.  With plenty of eartips to choose from, and the ability to wear the ‘phones straight-down or looped over the top of the ear, Final Audio has the bases covered.  Even after two hours of heavy listening, my ears still don’t feel a thing.

Final Audio doesn’t offer a frequency range for the E2000, but I’d bet it lands somewhere around 15-27,000 Hz.  Impedance is low – perfect for a low output device like a high-res portable player.  Sound Pressure Level seems a bit low, being the same 100 dB found on the higher-end E3000.  However, in actual use, adequate volume never really becomes a problem.  Finally, Total Harmonic Distortion is also missing from Final Audio’s given specs, but I’d peg the THD at <0.2%…or even <0.1%.

With good detail and strong bass, the E2000 offers a rich and engaging low end.  While excellent control keeps bleed to a minimum in most situations, the bass does seem to occasionally overpower some finer details in the low end.  This doesn’t sound exactly like bleed, in that there’s no real corruption of the sound.  All the finer details are still there, but now they’re  covered in Bass Sauce.

Fidelity in the midrange is superb.  Notes stay crisp and clean, even when that pesky love-it-or-hate-it bass draws more attention away from the lower mids.  Vocals and instrumentation still remain clean – there’s no distortion or compression at play here.

Perhaps the greatest contrast in regards to the E3000, the E2000’s  high end doesn’t sound bright at all.  More relaxed, the smooth highs still ooze detail, but do so without verging on piercing or uncomfortable.  While I was amazed by the highs on the E3000, I’m downright dumbstruck by the E2000’s high-end performance.

There’s plenty of depth here, but only an adequate sense of placement.  Not a total deal-breaker, placement can sometimes seem jumbled and oppressive.  Most earphones suffer poor soundstage by default, and the E2000 still sounds better than most of the competition.  However, those critical listeners who slaver for maximum soundstage will be better off considering the E3000.

Before my listening sessions, I was unsure of where this earphone sat in relation to other models in the Final Audio pantheon.  Now, though, I’m pretty sure that the E2000 is a less expensive – if also more dynamic – alternative to the higher-end E3000.

I usually detest headphones with aluminum earpieces.  I’ve been burned too many times by the wonky, sludgy acoustics of lesser earphones.  The E2000 doesn’t suffer from that design, though – it’s a truly refreshing experience.

If you’re looking for a slightly brighter high end and a more balanced listening experience, skip the E2000 and go with the E3000 instead.  Likewise, if you’re on an epic quest for more soundstage, the E3000 is where it’s at.

Those who desire a more emotive earphone would be better off with the E2000, though.  With just as much detail, but with a more dynamic sound, the E2000 offers a rich, throbbing low end and smoother highs.

Personally, while I would use the E3000 for a critical listening session or two, the E2000 is the earphone I would be taking home at the end of the day.

Why no comparisons to other earphones?  I can’t recall any other high-end earphone offering such a rich, dynamic sound at a similar price.  I’ve tried tons of different earphones, and I keep wracking my brain to think of a worthy contender, but no dice.

Dunces may dismiss the Final Audio E2000 as a cheap alternative to it’s higher-priced counterpart.  However, with ample detail and a truly dynamic sound, the E2000 offers a unique listening experience that any audiophile will easily appreciate.

See more options in the Final Audio Store at Audio46!