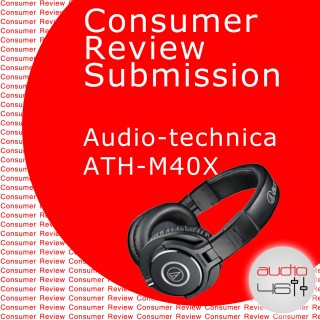 Since I’ve never seen anyone that I knew wear it, and always saw other people wear beats and such, I was a little skeptical of how well these headphones were. I researched and saw a lot of people say that beats are just really good at advertising there stuff. I’ve seen many videos researched a whole lot before picking these headphones. I was on a tight budget so I only got one chance at making these right. I hate my job but I gotta work, these headphones helps me relax and zone out when I’m on break. Its GREAT!!! I probably would’ve gotten fired by now if I did’t buy these. I BRING THESE EVERYWHERE! But Remember this is a review so I’ll try my best to not be biased toward these, and if you don’t trust me, check it out yourself you won’t regret it. I promise.

In my opinion for the Audio-technica ATH-M40 reviewing, first off this isn’t a fake review to get you into buying it and secondly if you’re thinking of buying beats, don’t. These bad boys are way cheaper and work just as well as beats. I’ve personally tried Beats studio 2 and really that it was absurd how that was around 200$, whereas these were < 99$ and the quality was the same except for the bass, the beats slightly beat audio technica in that. The audio quality is amazing, I compared it too a 20$ earbuds and just saw a huge difference, not only are these crystal clear audio but I even noticed sounds that I’ve missed which made a song a whole lot better. Also if you just wear it straight up it sorta cancel noises, obviously not as well as real ones but I sometimes just wear them to just turn off the area around me, also it improves the songs quality.

The headphones in general is super comfortable but it might get uncomfortable if you wear glasses, I say ‘might’ cause I have really crappy glasses and that might be the problem. No lie but I think that if these headphones were a girl I would definitely make her my princess wife. But nonetheless these were the best headphones you could get. These might not be the kind of headphones you bring to the public depending on your personality but I do so anyways and I noticed that people can’t say crap about it because of how great the sound is, also who cares what other people think, they aren’t the ones that are listening to there awesome songs.