Compared to the previous Jabra sports headphones we’ve tried, the Pulse are definitely a more minimal affair. The short, tangle-free cord is long enough to lie behind your neck, and has a small clip included to keep the cord raised so it doesn’t swing around. In calmer, non-blustery conditions, the Pulse won’t wave about too much, but when the wind picks up the cable has a habit of repositioning itself on your shoulder. It’s not enough to want to take them off during a workout, though.

There’s an inline remote built into the cord, up near to the right earphone. It handles most of the standard functions you’d expect, such as adjusting volume, activating Siri if you’re using an iPhone, and also skips tracks via a number of different button presses. It’s well positioned and easy to reach. 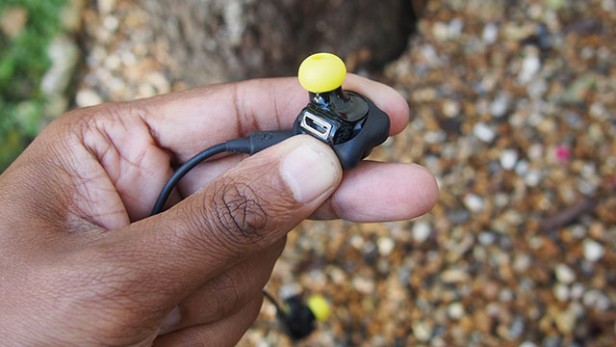 The water-resistant earbuds themselves look fairly normal, but you’ll soon notice these aren’t quite your standard in-ears. On the left side is where all the heart-rate monitoring happens. If it’s not properly positioned inside your inner ear then you won’t find a connection.

Jabra includes three sets of earhooks to keep it securely in place, and while it won’t offer the kind of satisfying security as Yurbud and Monster’s iSport range, it does a very good job and it was only in really torrid, rainy conditions where we had any problems with the buds moving about slightly. 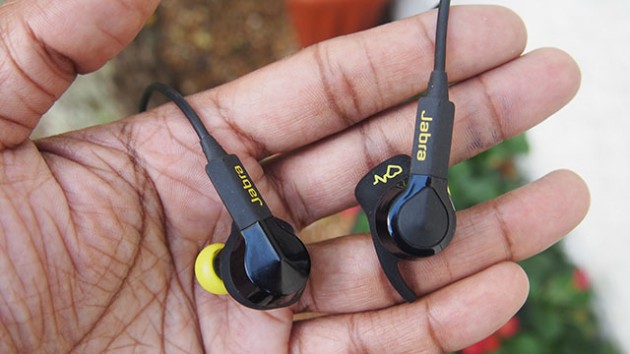 Built into the outside of the left earbud is the really handy Sport button. When the accompanying app is running, a quick press on the Sport button will give you an update on progress, including distance, time, heart rate and other useful tracking metrics. It’s a really useful feature for when you’re out running and don’t want to reach into your pocket or look over at your armband.

Over on the right earbud is where the micro USB charging port is neatly concealed beneath a Silicone rubber hook that seems like it might not stay in place. Thankfully it doesn’t budge and it was only on rare occasions that he had to fiddle about with it. 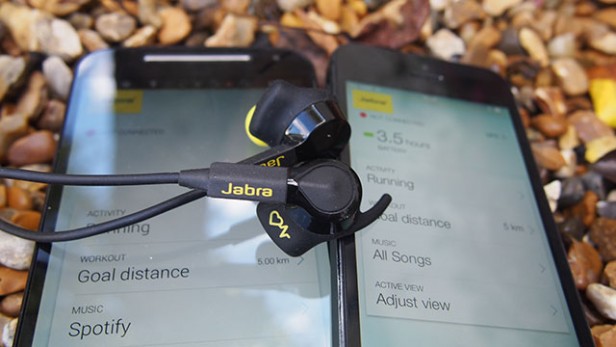 The biggest feature here, of course, is the heart-rate monitoring. As mentioned, all the important technology is packed into the left earbud. Jabra manages to pack an optomechanical sensor that shines light against the skin inside your ear to detect your pulse and oxygen consumption and generate a reading. The ear is the part of the body packed with small blood vessels, which should help ensure the information is reliable. Jabra reckons it’s almost as accurate as the ECG machines used in hospitals, which is a bold claim.

Unlike LG’s heart-rate-monitoring earphones, there’s no processing hub to wear around your arm, as data is sent directly to your connected Android phone or an iPhone running Bluetooth Smart 4.0. If you want to map your workouts, you’ll need to harness the phone’s GPS signal.