Disclaimer: The Noble Savanna was given to me by my friend for testing and reviewing purposes. Noble is not involved with this review.

The company is run by John “the Wizard”, and Brannan “the Glove”. John is the founder and he’s been a popular guy for a long time in the business.

Even though my review is about a universal unit here, Noble is mostly known for their custom IEM’s of course. The Wizard Designs are exceptional in the market and the Prestige CIEMs are really a pinnacle which hasn’t been matched by any other company. Noble also has a good customer relations and after-sales service. My friend, who gave me the Savanna for testing has a good contact with Brannan. As far as I can see he is a good and a helpful guy.

Also I should say that the Head Fi topic “the Wizard Returns” is very cool and funny which I love to look upon every once in a while. It still remains one of the most popular threads.

Well, giving special names to products isn’t a new thing but it just became a little more popular in portable audio recently. This model is a renamed version of the old Noble 4. Note: I’ve never listened to that one before. The only specially named IEM was the Kaiser 10 for Noble before these new developments. All the others had numbers based on the driver count. Then came Savant – which has similarities in sound with this one – the second special named unit after K10.

Noble’s been on the move recently. First they renewed the famous K10 with a fully new aluminum shell and now they’ve redesigned the whole lineup with new names and new shells.

In my opinion they did what they had to do as you can’t stay where you are without a change for a long time. You need to proceed and eventually become better. Similar things from other brands have been happening as well recently. Even though you make amazing custom monitors, a lot of people still prefer to go with the universal, just because they don’t want to commit and hustle through the process.

Also, if your ears somewhat big, there’s a better chance to get a good fit with the universal monitors. So you can stick with the universals all along just like myself, without the need to wait for long periods and (possibly) face more because of a refit process. There’s also a value problem: You lose some amount of value when selling your CIEM’s. Therefore, you may want to go with the universal version to sell it without too much loss.

I think all CIEM manufacturers should include good universal options. The old lineup from Noble was just too plain for me (not the Wizards of course, I’m talking about the classics). It’s good to see them pushing themselves for more. And not just that, they introduced a second flagship called “Katana”. Sounds cool and I hope I can listen to that one soon.

The new look is definitely an improvement over the old classic universal design. Especially the company’s logo on the plates caught my eye. It’s embedded into the CNC aluminum which looks even cooler than the newest K10 logo to me. The color itself also looks nice and premium. Unlike the K10, which has a full aluminum body, the inside part is plastic. Considering the price difference that’s not a surprise but frankly I expected a full metal body. But it’s still very nice as it is and it does look durable.

Overall it’s a very good update. The price has increased 50$ for each IEM and I assume that’s because of the new constant costs to build this new lineup. The design is pretty simple and there’s not anything else to talk about. Nozzle quality is good and it feels solid as well. 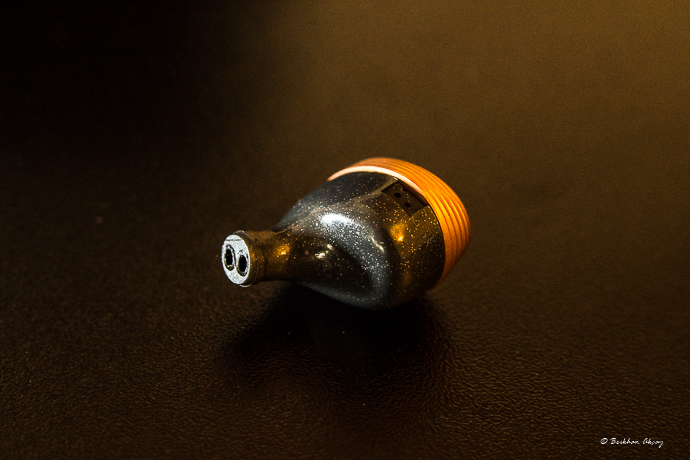 As well as the build, fit is also better with the new lineup. But is it great?

Noble’s universal fit wasn’t the best for me personally up to now, but this time thanks to the longer nozzles the fit is a little bit better. But still, I think Noble universal bodies are oddly shaped and not too convenient. In addition to this, I also think there shouldn’t be a memory wire with this kind of a design because it doesn’t help the fit, instead it makes it worse. Memory wire prevents the IEM’s to go deeper in your ear, therefore it forces the IEM’s to stick out. With this design, the 2-pin sockets are not next to your ears, they stay outwards a little so that means you have to shape the memory wire properly but it’s harder than most. A shorter memory wire does not help either.

With some adjustments I managed to get a fairly good fit. I shaped the memory wire not around my ears from behind, but around my ears from the side to prevent the inconvenience caused by the wire. So no force from the memory wire to push the IEM’s to stick out from my ears. I pushed the IEM’s more from the bottom sides to my ear canals. The result is quite good. Still not great though.

The shape of these Noble Universal’s isn’t too intuitive but at the same time the longer nozzle is a nice welcome to get a better fit than the previous versions. Of course here I have to say the fit depends heavily on the person’s ears shape. So I can’t say a certain thing here like “the fit is bad”. But I can certainly say is; there’s a better chance to get a good fit over the old design with these.

Isolation is at acceptable levels. Once you manage to get a good fit, I don’t think you will receive much outside noise. Comply comfort series is a good experience in this regard. Spiral Dot’s weren’t good for me. I prefer to have a deeper insertion as they’re quite short tips. Stock silicones are OK, but I got better isolation with Comply Foam’s. I think longer tips are your friend with these because of the design but of course fit always can vary with your personal experience.