Disclaimer & Introduction: I asked Dale if he wanted to write another review for us as it’s been a very long time since we featured one of his reviews. Dale is very active in our comments section, Amazon, Youtube and a whole bunch of other “audio” platforms. The PS1000e isn’t a review sample, it is his own headphone and he has paid for it himself. We have done several other Grado reviews before: the PS100E’s baby brother, the PS500, the SR80e, the Grado GR8e and the Grado GR10. Grado is not a site advertiser, all pictures are property of their owners (not made by HFN) and all Italic parts are by my hand (Lieven).

Everyone knows Grado and I’m sure almost everyone knows this is a family run business since 1953. Most people will probably link Grado to the famous 80 and 325 series as both these headphones offer a lot of value for money and have been sold all over the world. Grado has a lot of fans but just as many other audiophiles aren’t too fond of the typical Grado sound.Next to head- and earphones, Grado also makes a headphone amplifier but they also have a good reputation for what phono cartridges are concerned.

According to the Brooklyn USA based Grado, this PS1000E from the Professional series, is a Hybrid headphone: “By using tone-wood clad with metal alloy we’ve obliterated two of the most vexing issues in headphone design: ringing in the chamber, and transient distortion. This gives audio professionals the security of consistent response throughout the frequency range”. “This hybrid design has an inner sleeve of hand-crafted mahogany made by using the new series ‘e’ curing process. Its outer housing, machined from aluminum then chrome-plated, utilizes a special processing and casting method to increase the porosity of the alloy. This combination of wood and metal insures that the earphone chamber has no ‘ringing’ which might obscure detail or add coloration. The way the wood and metal housing moves air and reacts to sound vibrations is virtually unaffected by transient distortions. Grado has also designed the cable for the PS1000e; the twelve-conductor cable design uses UHPLC (Ultra-High Purity, Long Crystal) copper, improves control and stability of the total range of the frequency spectrum. The PS1000e also has a new 50mm driver and a newly re-configured voice coil and diaphragm design, resulting in unsurpassed speed and accuracy responses.” 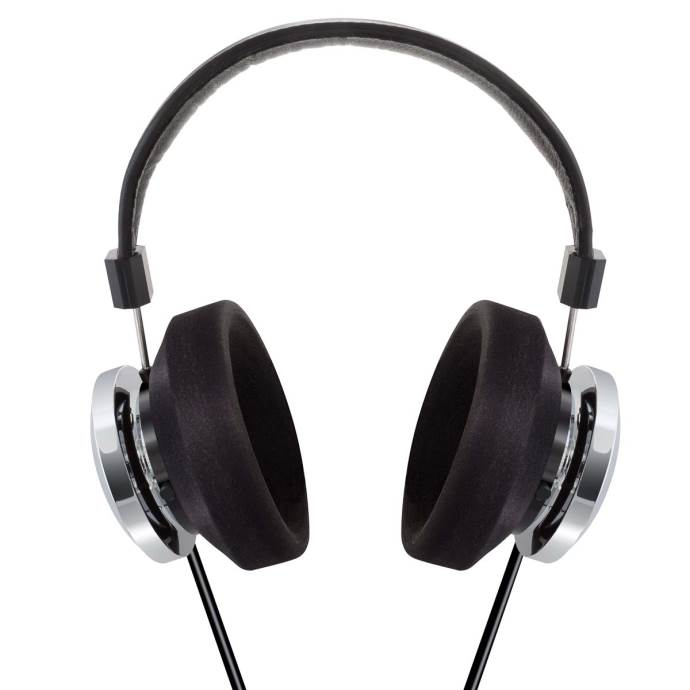 “The cushion design creates the correct balance between the driver and housing to support the desired musicality. The cushion design also makes the PS1000e one of the most comfortable headphones in the world. Grado has taken all of their knowledge and over 60 years of experience in controlling resonances and eliminating distortions, and put them into the PS1000e.” On to the review

The Grado PS1000e is heavy (567 gr), and you will need to keep your head very still while listening to it, or else it will feel like a large bowl of water sitting on your head with the water sloshing around. I thought I’d get that out of the way first, since it surprised me when I first put it on. It is remarkably comfortable in use (when sitting still) because the spongy cushions are fairly soft, unlike the cushions on the lowest-cost Grado headphones. The PS1000e is a cross between an around-ear and on-ear headphone, since even though the very roomy ear-cushions do go all the way around the ears, it still feels like it’s on-ear since the pressure comes almost entirely from the top (the weight), and the usual ear-clamping force is nearly nonexistent. That explanation might not seem to make sense, but the sensation is unique in my experience, unlike the equally heavy Final Audio Sonorous VI which feels very much like an around-ear headphone on my head. 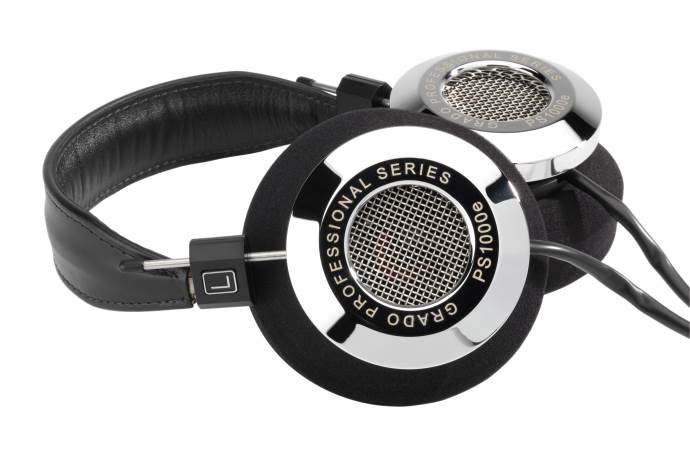 I’m aware that many users modify the PS1000 series, since it’s easy to pull the ear-cushions off and replace them with different types of cushions or earpads. Since those mods have a big effect on the sound, I won’t try to cover any of that in this review. The standard price in U.S. dollars is $1700 more-or-less, and I think most customers for this headphone will expect it to sound like a $1700 headphone with the standard ear-cushions. Well, let me clarify that – it may very well be possible to improve the sound with different ear-cushions, but you’d need to do some research to find out what the available options are. The PS1000e is completely open of course, so there is no isolation, and leakage is total. An important aspect of this is to not block the outside of the earcups in any way, and you can hear how much the sound would change just by placing the palms of your hands against the earcups when listening to music.

The PS1000e is an impressive item to hold in one’s hands and show off to other people who haven’t seen anything like it. The large and heavy polished aluminum earcups look like something out of a futuristic space-battle movie, and if you were to own it and get along with it for extended music listening, you’d certainly be proud of it. The PS1000e looks and feels like a $1700 headphone, from the huge shiny metal earcups and enormous earpads to the heavy-duty cable that looks like you could tow a truck with it. The availability of this headphone varies a lot, and it took two months for me to get it at the MSRP price. I had seen many of these listed above $2000 USD in the meantime.

The story continues on Page 2, after the CLICK HERE

How to wear earphones without damaging your hearing Guide