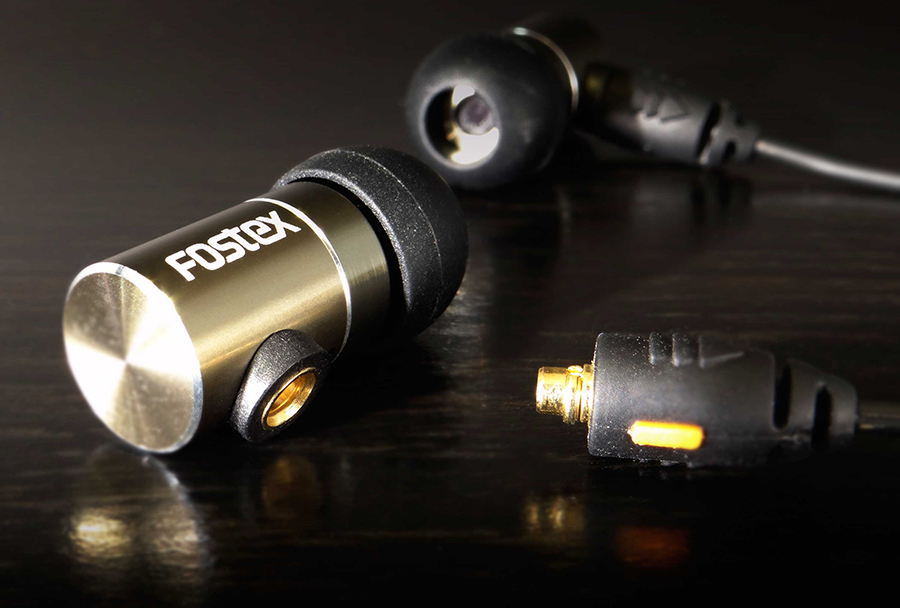 There has been a big rise in sales of headphones and IEMs in recent years. The history of Fostex actually dates back to the Foster Electric company making loudspeakers from 1949, and Headphones and IEMs have been a part of the company’s portfolio for a long time. Their 6301 active mini monitor has graced recording studios since 1981. So, with their TE05 and TE07 IEMs I should be in safe hands.

Each offering new technologies or perhaps new looks. Fostex have been producing some good products in recent years, a name I first heard in the 1981 with their A8 eight-track reel to reel recorder the precursor to many a personal recording studio that included cassette and then digital portastudios. There are so many ear and headphones flooding the market that it important that you choose carefully before parting with your cash. As well as technical specification this includes ‘fit’. These two are big enclosures which were my first concerns. Being used to the diminutive and excellent Flare R2’s anything that stuck out my ear was going to cause me concerns, especially if walking or running. These headphones are fairly heavy, but managed to stay put after a certain amount of pushing. Both IEMs have similar dimensions the cheaper black with conventional 3.5mm plug and the more expensive TE07 in silver and ‘L’ shaped 3.5mm jack and with colour-coded left and right colour coding on the enclosures, making them far easier to direct to the appropriate ear. The cheaper TE05 wasn’t so easy to identify; having a minute protruding R and L word moulding could never be easily seen, especially in the dark.

For the test I used three players; iPod, Fiio X5 and the Questyle recently reviewed by me in HiFi Pig. Both had their distinctive Fostex sound of highly musical midrange, and slightly rounded top end.  Classical music worked well. Simon Rattle’s Sibelius Symphonies offering from Deutsche Gramophone was forceful and accurate.  All was there. I actually preferred the bass on the cheaper TE05, which was more extended. Both have removable and anti-tangling cable though did find the cable could be noisy when it rubbed against my clothing, something only a few manufacturers have successfully cured; the 6N cable model ET-H1.2N6 cable in the TE07 can be updated for the TE05, should you wish.  The IEMs also come with a handy leather case. Both are efficient at 92dB/95dB for the 05/07 respectively. Both are made from aluminium and come with 4 size ear tips (XS, S, M, L) for matching to your ears.  Both pairs are significantly better than the TE03, the baby of the family. Whilst the bass is less boomy than my fun £17 JVC Xtreme Xplosive, I did in some respects prefer the JVC XX’s for excitement and involvement. These IEMs are dressed to impress, where the Fostex are recessed and controlled. If anything I felt the sound was a little like an upturned “V”, with most of the work happening in the midrange. A/B testing is always a bad thing as you can be affected by what you have just heard, so I made sure I auditioned them without my reference Flare R2Pro  infecting my aural observation. The more I listened to the Fostex the more my ears adapted to the sound and I found them more and more impressive over my initial observations. The sound from both is fast but it is very exact and allows music to open up so I could hear facets I was hitherto unaware of in my FLACs and WAVs. The mid-range is the most important part of the music, as LS3/5a historians will atest to. Those speakers might have little bass below 100Hz and were designed for 400-20,000 Hz nearfield studio operation, particularly spoken word, but the sound is still special 40 years later, and once you get used to the lack of bass, everything else makes up for it, and it doesn’t seem to matter. With the 05’s and 07’s the detail in presentation of the music stops you worrying about the recessed bass and the tad harshness in the top end – especially in the TE05’s. The TE07’s have more control in the top end, though it is less pronounced, but the bass is better in the cheaper TE05’s.

Tops and bottoms were all there, just not so ‘in your face’ as many IEMs like to have them ; Iver Kleive’s organ interpretation of ‘Bridge over Troubled Waters’ (96/24, HD7041888514725) had a deep bass end that was all there but very well managed, and the top end in Karl Ristenpart’s  JS Bach four concertos for harpsichords BWV 1060-1065 (192/24) was  clear enough to hear the mechanics of the plucking strings, but again, not sticking out so that you have to notice it. These headphones were becoming more addictive the longer I listened, and I actually preferred the cheaper TE05 once I got used to the slightly tizzy top end.

These IEMs give you a modest and honest sound engineering especially of the important mid frequencies that many earphones and headphones cannot do at any price. If you want a smileyface response with excessive bass and treble, then these won’t give you that. But Fostex was primarily a company for the wannabe sound engineer when it was formed in July 1973, and that is very important here.