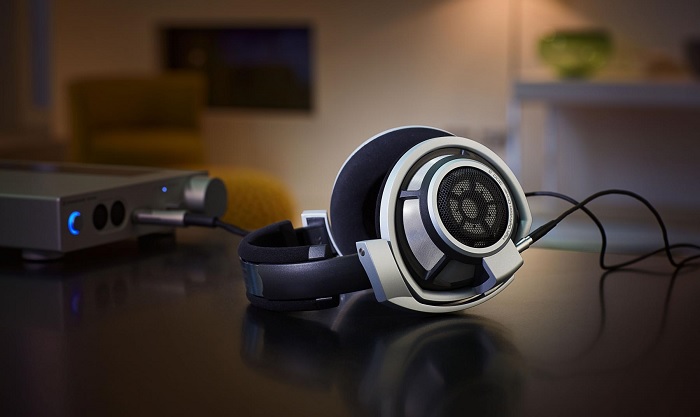 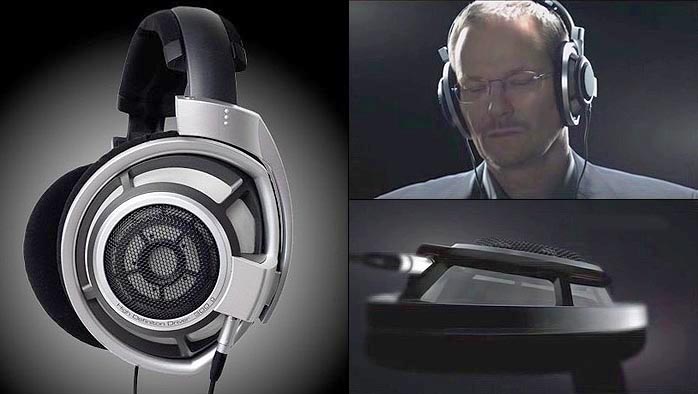 Model changes at the upper end of Sennheiser’s headphone line don’t happen very often. The previous flagship–the still available HD 650s–were introduced in 2003, and remain in the line. Their predecessor, the HD 600s, came out more than a decade ago, and are still popular with audiophiles. I’ve reviewed both, and they’re both excellent headphones. But the HD 800s are something else again. They feature an all-new design that one-ups previous Sennheiser headphones. But that exclusivity is going to cost you a mint: the HD 800s retail for $1,400.

The HD 800s’ striking design sets them apart from every other headphone model on the market. But it’s not just a styling exercise; the large earcups were designed to place the drivers farther away and slightly to the front of the listeners’ ears than was possible in smaller designs. The precision quality of the earcups’ plastic, metalwork, and the microfiber ear cushions certainly feels luxurious. The HD 800s perfectly distributed their 330-gram weight on my head, and ear pad pressure felt just right. The headphones are supremely comfortable.

The HD 800s’ patented doughnut-shaped transducer measures 56 millimeters across; Sennheiser claims it’s the largest used in a modern headphone. It’s interesting to note that the vibrating part of the diaphragm is not its circular interior but its outer ring. The design is said to produce less distortion than conventional drivers.

Each driver is tested, measured, and given its own unique identifier. So if you ever need to replace an HD 800 driver in the future, Sennheiser claims it will be able to provide an exact match.

The 10-foot, cloth-covered Y-cable (one cord to each earcup) features silver-plated, oxygen-free copper wiring. It’s reinforced with Kevlar to enhance durability. The cable is removable from the headphone and features new patented and proprietary connectors. The base of the 6.3-millimeter phono plug is a nicely finished, solid metal piece. (You’ll need to provide your own adapter if you want to use an audio source with a standard 3.5-millimeter headphone jack.)

The HD 800s come packed in a beautiful storage case. Each pair of headphones is hand-assembled and tested in Germany.

Please understand that great headphones aren’t just about “more”–more bass, more detail/resolution, or whatever. The very best ones offer a finely tuned sonic balance. That’s what truly distinguishes the HD 800s; they “disappear” more than any other dynamic (nonelectrostatic) headphones we’ve used. With the HD 800s, you feel like you’re getting a direct connection to the music.

The HD 800s sound a bit less like headphones and more like high-end speakers than any headphones we’ve heard since the long-gone and very expensive AKG K1000s. The HD 800s’ sound appears to come from in front rather than to the sides, compared with other headphones.

The HD 800s’ open quality certainly increases their sense of space and depth compared with most other headphones. The downside to that is, depending on the recording, the HD 800s’ sound may seem too distant or spacious to some buyers. We liked it, though–a lot.

That open quality was definitely a plus for our home theater auditions where the sound almost appeared to come from the screen. We watched the dramatic “State of Play,” and the HD 800s put us inside the newsroom with ringing telephones, the clatter of keyboards, and voices of other reporters filling a huge space. We soon forgot that we were wearing headphones and lost ourselves in the film. The HD 800s have a special affinity for movie dialog; it was the most natural we’ve ever heard from a dynamic (nonelectrostatic) headphone.

Moving to action, the “King Kong” DVD’s ample dynamics were very good, but lacking the impact we heard from the Grado PS1000 headphones. During the scene with the rampaging dinosaurs, we could almost feel each thump on the ground with the PS1000s. By comparison, the HD 800s softened the blows.

Up to this point we listened to the headphones exclusively over our Onkyo TX-SR805 receiver. For CDs, we switched over to our Woo Audio WA6 Special Edition headphone amplifier, which significantly improved the HD 800s’ overall sound quality, most notably in the dynamics and resolution of fine detail.

With CDs, the HD 800s sounded clear but laid-back compared with the Grado PS1000s and Ultrasone Edition 8 headphones. Those latter two had much brighter treble and more bass oomph than the HD 800s. So it was easier to follow the guitar lines when rocking out with the Rolling Stones’ remastered “Sticky Fingers” CD. The bass and drums were more “live” sounding with the Grado PS1000s, and to a lesser extent, the Ultrasone Edition 8 headphones.

Honestly, we think those two are less “accurate” than the HD 800s, and if that’s your top priority, go for the HD 800s. But for our tastes, the Grado PS1000s were more exciting and engaging. The Grado would be the one we’d buy.

To finish up we played the HD 800s over an iPod. The sound was spectacular in every way but one: it couldn’t play very loud. It was loud enough for us, but if you really like to crank your tunes, the HD 800s won’t be a good match with an MP3 player. The Ultrasone and Grado were better in that regard.

The Sennheiser HD 800s are in the top tier of ultra-high-end headphones. If you’re in the market for superluxury ($1,000-plus) ‘phones, they should definitely be on your list–if not at the very top of it.