Lately we’ve been getting a lot of questions regarding the Sennheiser HD 579 and HD 599.  While word has spread that both headphones offer a truly impressive listening experience, many folks are at a loss as to which one they should buy.  Well, Audio46 is not going to push either one on you, but we will give you the pros and cons of both models.  Then you can decide for yourself:  which one really tickles your fancy? 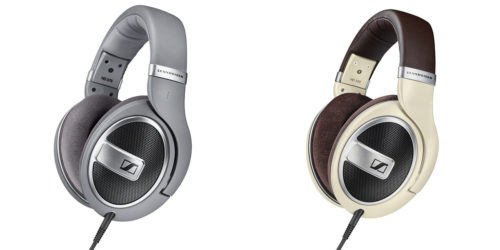 For most of us, the HD 579 and HD 599 will appear remarkably similar.  While the higher end 599 does sport a color scheme more akin to it’s direct predecessor, the HD 598, both the 599 and the 579 utilize similar materials.  With a mostly plastic build, weight stays low, reducing fatigue.  Meanwhile, velour earpads and leatherette headbands offer plenty of comfort.

Both headphones wear like a dream, and in a blind test with no music playing, you’d be hard-pressed to tell one from the other.  However, in terms of accessories, the higher-end 599 does come with a second detachable cable – one that ends in a 1/4” stereo plug.

Obviously, then, we should admit that the HD 599 is probably the more serious of the two headphones, but we’ll have to go “under the hood” to see where these two contenders truly start to diverge.

Both the 579 and 599 offer a decent frequency range, but the specs reveal greater coverage with the HD 599.  Likewise, while nominal impedance and sound pressure level remain the same for both models, the HD 599 sports lower distortion (and thus a cleaner sound).  Both headphones could potentially work with a portable music player, but both would also benefit from some amplification.

The HD 579 really shines where lows are concerned, offering a clean and articulate sound with plenty of detail and well-controlled bass.  By comparison, the HD 599 offers a bit more detail and more intense bass.  Unfortunately, that same intense bass has a tendency to overwhelm other parts of the frequency range.

Midrange on the HD 579 is overshadowed by a slight amount of compression in the upper mids.  Despite this, it still offers a cleaner sound than the HD 599.  While the 599 might offer tiny bit more detail, the increased compression tends to pinch and drag down vocals in the mids.

Here we see the lower-end HD 579 lose to the over-engineered HD 599.  While the 579 offers a decent (if somewhat subdued) listening experience, the high end on the 599 is practically perfection.  The HD 579 tends to smooth out the high end, leading to a loss of some finer details.  In contrast, the HD 599 offers all of those details – without ever becoming piercing or uncomfortable.

Soundstage on both headphones is almost too close to call.  While both sport amazing placement, depth remains wanting.  The resultant sound from either headphone will allow you to hear each instrument occupying a sense of space.  However, the lack of depth on either pair of cans can result in an almost-oppressive listening experience, with the music seemingly bearing down upon you from just a few feet away.

The longer I switch between the two models, the more I prefer the comfort of the HD 599.  It may offer a slightly wider fit (thus better accommodating my giant head).  Or maybe my mind is playing tricks on me…

Critical listeners will love the HD 579.  Really, this is one of the better Sennheiser headphones released in the past couple years.  I know people love the HD 800s and the Momentum hype, but the HD 579 is truly and impressive headphone.

Still, there’s something about the HD 599, too.  The dynamic sound is going to be a home-run for the younger crowd who comprise a good part of the Sennheiser customer base.

All right – let’s get down to brass tacks.  The Sennehesier HD 579 retails for $199, while the HD 599 retails for $249.  Despite this relatively small difference in price, these two headphones offer wildly different listening experiences.

For those seeking a more critical and even-keeled sound with decent lows and highs, but a beefed-up midrange, the HD 579 is a Sure Thing.

Fans of rock and hip-hop – or anyone who prefers a more dynamic sound in a headphone – would be better off opting for the more expensive (but more intense) HD 599.  Here, the intense lows and highs offer a somewhat less exacting sound, but one that is infinitely more emotive.

Despite a small price difference, the Sennheiser HD 579 and HD 599 offer two completely different sounds.  While the cheaper HD 579 will astound critical listeners, casual music buffs and headphone junkies alike will appreciate the more dynamic chops of the HD 599.

Check out more headphones like these in the Sennheiser Store at Audio46!