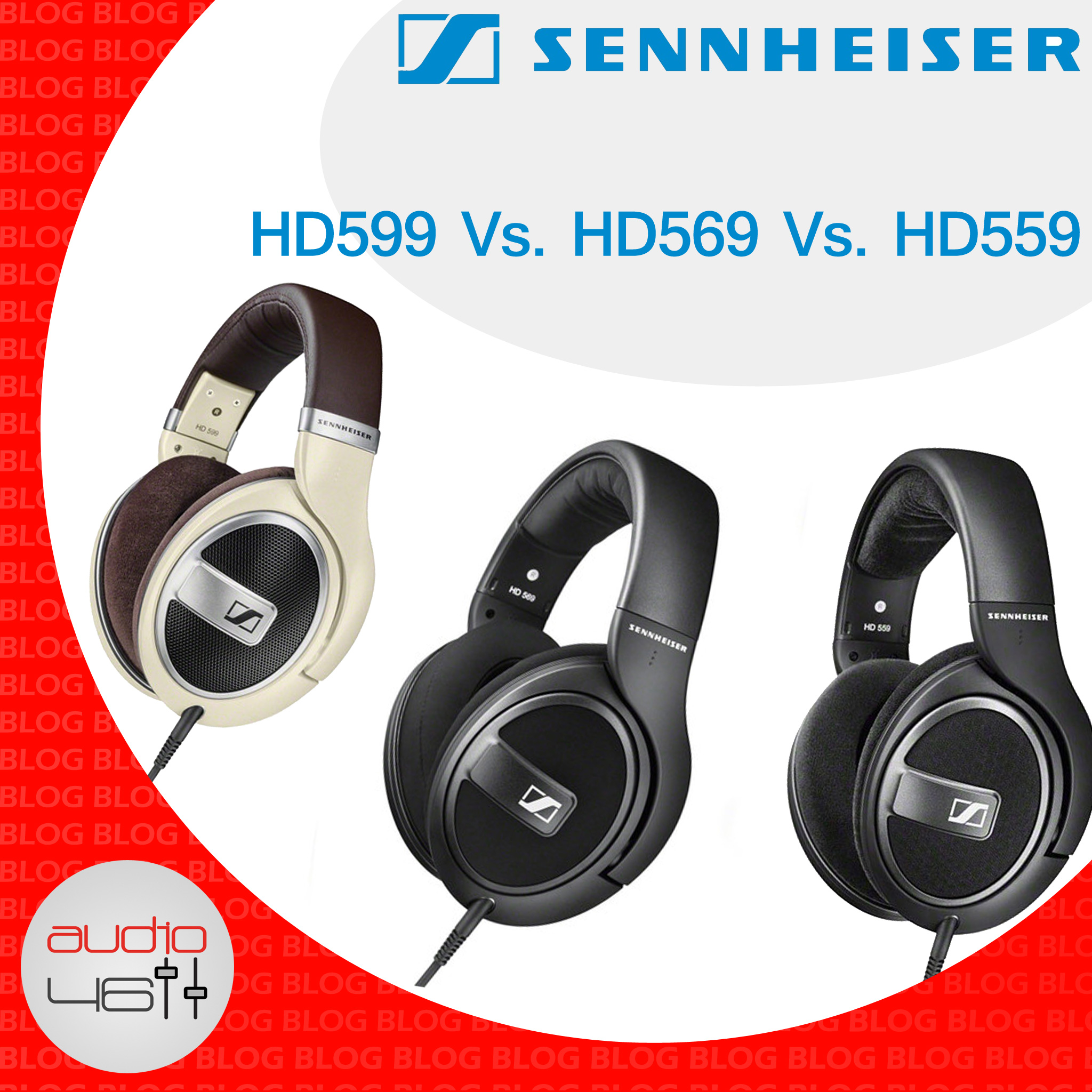 With the release of the new 5 Series headphones from Sennheiser, you may be asking yourself “What are the differences?”  Luckily, Audio46 has you covered.

The HD 599, 569, and 559 all make use of a plastic build.  Even the extenders in these three headphones are plastic.  While this reduces some cost to the manufacturer, it also has the effect of making these headphones lighter and more comfortable.

All models are about as equal in terms of build and comfort.  As far as compatibility is concerned, the HD 599 and 569 both come with connections for 1/4’’ stereo and 3.5 mm stereo, while the HD 559 will require the purchase of a separate adapter plug for those who want to use it with a 3.5 mm jack.

From these specs, it’s plain to see that the HD 599 offers the most impressive stats, while the HD 559 offers a similar experience overall, but at a much lower price point.  The HD 569, stuck in the middle, offers a closed-back alternative to the other two open-back models.  Likewise, the specifications for the HD 569 reflect its intended use as a more portable option, with louder volume and a lower nominal impedance.

All three models offer a good levels of detail in the low end, though the HD 569 and HD 599 offer increasingly more than the 559.  While detail is present in all three, the copious bass of the HD 559 has a habit of bleeding and obscuring some of those details.  The HD 599, which also boasts some powerful bass, manages to control the distinction better, leading to a richer, cleaner sound.  In contrast to both of these models, the HD 569 has considerably less bass, but operates with more control, and may offer the cleanest-sounding low end of the bunch.

The Midrange on all three models is decent, and twinged by just a hint of compression.  This isn’t the end of the world – the sound does in fact remain passable – but none of the three really offer a completely accurate sound here.  By far, the 599 and 569 sound the best in this area, with the mids of the HD 599 sounding just a bit more recessed (due to the overall dynamic nature of the headphone).  The HD 569, in comparison, is a more even-keeled sound.  The HD 559 follows the sound of the 599, but to a less detailed degree.

While the HD 599 offers a bright, sparkling high end, the HD 569 and HD 559 lack the same level of detail, opting instead for a more relaxed sound.  A positive as well as a negative, this intense high end on the HD 599 offers more detail, but the sound can also verge on piercing at times.  This high end also contributes to the overall dynamic sound of the headphone, reinforcing the impression of a deep, immersive quality.

While the HD 599 and HD 559 offer a greater, more realistic sense of soundstage via their shared open-back designs, the closed-back HD 569 seems more “closed in.”  Depth and placement of instruments are the best on the HD 599, for obvious reasons, while the HD 569 may seem more exacting in placement, but skimpy on depth.

The Sennheiser 5 Series offers plenty of options regardless of listening tastes.  While these models do differ in slight ways, they’re all competent performers that do offer a distinct edge over competing models from other brands.

For those seeking the best sound among these three headphones – and one of the best sounds available for the price – the HD 599 is the best of the bunch.  For those on a budget, however, the HD 559 presents a similar level of performance with a much lower price of admission.  The HD 569, however, is a closed-back portable-minded variation of the other two.  For rock, hip hop, and even some classical listening, these headphones will more than do the job.  Critical listening applications, though, may demand a more even sound signature, or a greater level of fidelity.  If such is the case, we’d recommend the AKG K612 or K240 MK II.  For those seeking a brighter sound altogether (and one more accurately suited for jazz or classical music), we’d recommend the Grado SR225 or SR325.

With some slight differences, the Sennheiser 5 Series headphones offer something for everyone, but your choice hinges more on personal preference than it does on the character of any of these headphones.  They’re all good!

See more options in the Sennheiser Store at Audio46.com!