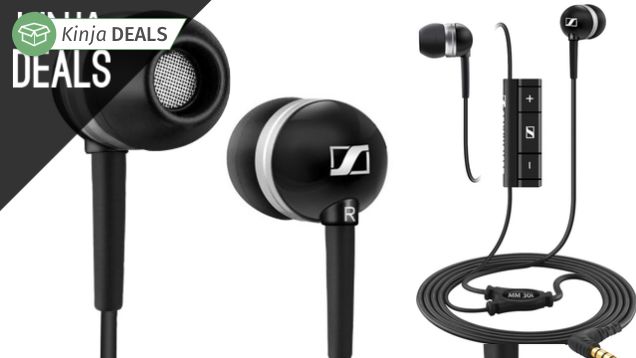 If you ever use the terrible earbuds that shipped with your smartphone, stop what you’re doing and replace them with
this pair of Sennheisers, marked down to an all-time low price today.

At $25, you shouldn’t expect
amazing sound quality from these headphones, but they’ll be huge upgrades over the ones that came with your phone. Like your bundled earbuds, you’ll still have a built-in mic and playback controls (just be sure to pick the correct version for your OS), but the big advantage here is noise isolation. Since these come with three different sized tips, you’ll actually be able to block out noise without cranking up your volume to drown it out.

These typically sell for over $40, and have never been below $30 on Amazon until today, so act fast before they’re gone. [
Sennheiser MM30i Headphones, $25]

Update: Sonic Electronix has knocked the Android version of the headphones down to $20. $25 is still the best you’ll do on the iPhone version.

Note: Amazon lists the Android version of these headphones as “for Samsung Galaxy,” but the buttons and mic should work fine on most Android phones. Check out this compatibility list for more details.

Get over the hump with today's best deals.Read more Read more

We work together with you to find the best products and the best deals on them, click here to learn more. We operate independently of Editorial and Advertising, and if you take advantage of an item we cover, we may get a small share of the sale. We want your feedback.