Affordability and durability are at the core of MEE Audio’s Bluetooth headphones series called the Matrix. Their latest release increased by $30 leading us to question whether the Matrix 3 is worth $119.99. Find out for sure in our MEE Matrix3 vs Matrix2 Review. 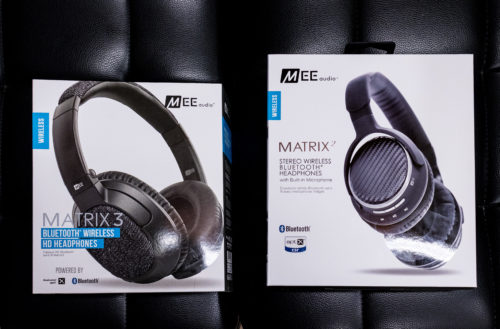 The boxes of the Matrix3 and Matrix2 are practically identical, at first glance. Though a longer look at the Matrix3 box showcases a headphone that seems larger in stature featuring a new design. When laid flat, side-by-side the box of the Matrix3 is also larger. While the outside of the box is similar, the inside contents are actually quite different. The Matrix3 is clearly an upgrade. A matte black divider embossed with the MEE audio “M” rests over the hard-grade carry case covered in a denim-like fabric. This material is also on the Matrix3 ear cups and headband. While the Matrix 3 case is smaller in terms of length and height, it is larger than the Matrix2 in terms of width. That hard-grade carry case is covered in a nylon-ish fabric and much flatter. That’s because Matrix2 headphones are not collapsible while the Matrix3 are. Inside of both boxes you’ll find a USB charging cord and a detachable cable for wired use.

In terms of build, the Matrix3 and Matrix2 actually bare a strong resemblance despite the third iteration becoming a collapsible model. The ear cups are still oval and ergonomically-shaped. Though, the cushions are much softer on the Matrix3. Both models feature leather-like ear cushions, but the leather on the Matrix3 is softer to the touch. That’s because it stuffed with memory foam while its predecessor may be fit with something a tad more stiff. P.S. The memory foam cups make for an audible difference between the Matrix3 and 2, in that the memory foam ear cups provide better passive noise cancelling. When I put on each headphone, one after the other, without playing any music, I could hear a bigger degree of silence between the two.

The ear cups swivel on both the Matrix 3 and Matrix 2, but the Matrix3 swivels smoother and faster. As I mentioned before, the Matrix3 is collapsible. The Matrix2 on the other hand seems to be made of a hard grade material of some sort of rubber or silicone blend. Subsequently, the extenders and the headband are more flexible than the Matrix3. 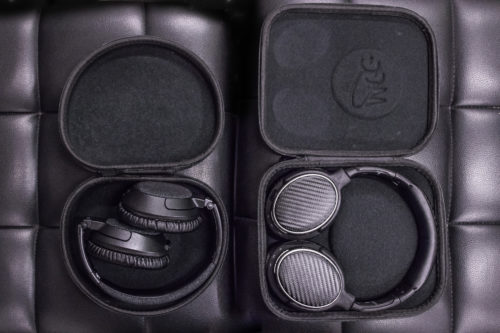 Both of these wireless headphones operate over Bluetooth 4.0. They both feature buttons for controlling your music, adjusting the volume, and answering calls, but the buttons that were dispersed along the left and right ear cup in the Matrix2 are now all on the right ear cup in the Matrix3. The aux port and micro USB charging port are on the left ear cup on the Matrix3. The Matrix 3 boasts 24 hour playtime, 28 hour talk time, and 1000 hours standby while the Matrix2 yields a talk and playtime of 22 hours with mere standby time of 350 hours.

Specs-wise, both headphones are fit with 40 mm drivers and hit a frequency response of 20 Hz to 20,000 Hz. Bluetooth 4.0 and aptX technology your audio should be skip free. Honestly, my music was skip free on both devices. However, with an iPhone users are able to pair up to 2 Bluetooth devices at a time. I found when I switched back and forth between the two there was a small buzz for a millisecond before it switched over. The buzz isn’t really annoying or a deal breaker. But I still think it should be mentioned.

When it comes to audio quality there is a noticeable difference between the two headsets. The Matrix3 is said to provide unprecedented balance, clarity, and accuracy. That much is true. The Matrix3 is more of a reference headphone that is neutral in tone. It is clear and accurate, but lacking in depth. The Matrix2 on the other hand delivers more bass. The audio has more depth and feels full. There is detail across the lows, mids, and highs, but not as much as the Matrix3. If you’re looking for warm sound with a nice low end Matrix2 is probably the better option for you.

If you want clarity and accuracy -and you don’t mind spending a few extra dollars, the Matrix3 is your best bet. Both headphones are available at Audio 46 MEE Audio Store. The Matrix3 is $119.99 and the Matrix2 is $89.99.